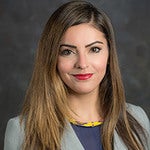 Attorney Sylvia S. Bolos graduated from Wayne State University Law School in 2013 and began practicing law in 2016. During her time at Wayne Law, Ms. Bolos was elected to the Wayne Student Board of Governors, served as the Treasurer for the State Bar of Michigan Student Section, earned her Mediation Certification, and interned for Honorable Chief Judge Gerald Rosen. In 2004, Ms. Bolos earned a Bachelor of Science Degree in Accounting from Oakland University. From 2005 to 2009, Ms. Bolos worked as an Accountant for a number of corporations, both in California and Michigan. From 2009 to 2016, Ms. Bolos worked as an Accountant and then Program Analyst for the Department of Defense.

Ms. Bolos is a nationally recognized speaker on credit reporting, debt collection, and auto financing issues. Ms. Bolos is a repeat speaker at the Eastern District of Michigan New Lawyers Seminar. And she has authored the Five Steps on How to Collect Your Judgment from a Recalcitrant Defendant, published in the State Bar of Michigan Consumer Law Section Newsletter in June 2017.

Ms. Bolos is a founding partner of FCRA Insight, LLC, and trains attorneys across the country on effective and efficient litigation practices. She is also a board member of All Well-Being Services, a co-chair of the Eastern District of Michigan Federal Bar Association's Rise Committee, and a member at large of the National Association of Consumer Advocates.

If you would like help with an identity theft or credit reporting issue, please fill out this form for a return call. We try to return all messages the same day, but messages left after 4:00 PM Eastern Time may be returned the next day.

Thank you for contacting us. We will get back to you shortly.

Please complete all required fields below.